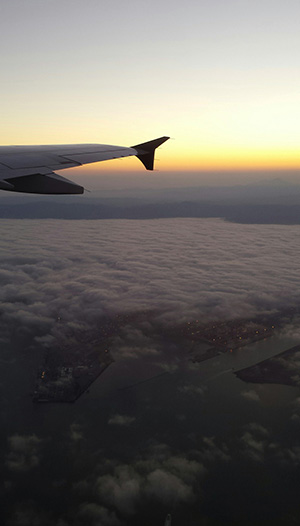 I was so nervous.

I flew for the first time by myself. Making travel plans was exciting, but also very frustrating because the school is in the middle of nowhere with very limited public transportation.

The flights there went well. I got a window seat for the longer flight, and then had a several hour layover. My second flight was delayed three different times. My laptop also began to make a crackling noise like the fan was hitting something, and then a puff of dust or smoke came out from the fan. I’m incredibly happy that I decided to buy a smartphone a few days before this flight! Being without Internet would have been scary.

The second flight was shorter than expected. We landed in the smallest airport I’ve ever been to – it only had two gates. I walked to the exit and a man with a name tag that said “Taxi” asked if I needed a ride. I was glad to find a taxi so quickly, but he took me into a van that didn’t have a money counter, so for the first few minutes I thought I was being kidnapped. However, he was friendly and quietspoken, and seemed to know every person that lived in the area. He pointed to all the houses, told me where his son lived, said I should visit the museum and also come back in October for a festival, and also talked about his divorce a bit.

I arrived to the hotel and there wasn’t an iron in the room for my interview clothes, as the website said there would be. The bathroom light did not turn on, I had to flush the toilet 3 times every time I used it, and I pushed the microwave into the wall just trying to open it. To curl my hair, I sat on the floor next to the fridge because that was the only place with a mirror and decent lighting. I wasn’t thrilled with the place, but it was cheap and close to the school.

In the lobby, the receptionists put on a PowerPoint and were joking that it was boring, and asked everyone interviewing for song recommendations. Everyone there put us at ease by laughing and saying hello.

I got taken back to an office and started the interview. It was very different from what I imagined it would be like. She was so easy to talk to, and it felt like a regular conversation. We joked, she gave me advice about the area and how a lot of women work as physical therapists in schools when they have kids so they have more time off. She complimented my GRE scores and the diversity of my observation hours, and I asked her a few questions about the school.

My interview was much longer than the other two people who interviewed, so I took that as a good sign. We had to cut it short because I was supposed to go on a tour.

The tour was pretty cool! We saw the cadaver classroom, which is shared with the physician assistant students. The PT students have their own hallway to decorate and practice in, and a student lounge to keep their food. We met a professor that was making the entire class laugh. The school had a very laidback vibe to it, and I loved that.

The only downsides are the area. It’s in the middle of nowhere with lots of farms and it really reminds me of home. It’s humid,  but it is close to the ocean and there are trees everywhere.

I’m supposed to hear back in a few weeks, so hopefully it’s good news! I postponed another interview at a school that is 30k more in tuition because I felt good about this school,  so I hope that was a good decision.

The unicorn that I drew on the plane ride back with Snapchat, and a view of Yosemite National Park.

Did you travel for any of your interviews? Share your experience below!