Winter break was 2 weeks long and much needed! I saw my family and most of my friends, slept in a lot, ate cookies, played with my pets, and didn’t do any studying!

I cuddled with my cat, Daisy.

I spent a few days in San Francisco with one of my good friends. We did touristy things and climbed up a hill.

We started class again this week. We had an online class and quiz on Monday and Tuesday, and had to be in class on Wednesday. I flew back on Tuesday night. That wasn’t my best plan as I had to study Tuesday night and take the quiz in person before class on Wednesday, and I only had chicken nuggets and a hot pocket at home. Flights are really cheap on Tuesdays though, so I did it anyways.

I had one long flight that was pretty relaxing. I was supposed to have a middle seat, but I was able to grab a window seat when I checked in the day before! I spent most of my time looking out the window and taking photos and videos. 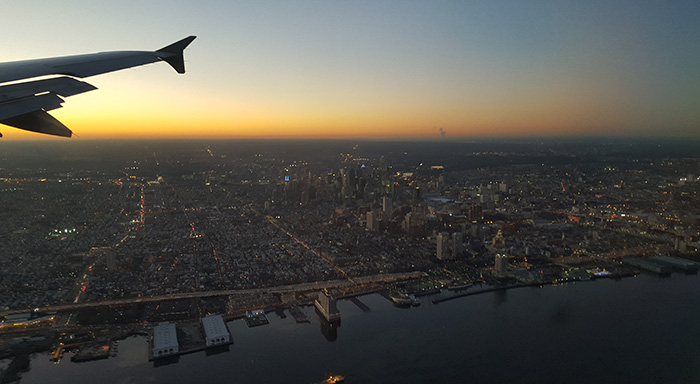 I had a layover in Philidelphia, and we landed right at sunset so it was beautiful!

However, the pilot missed the airport the first time around. He didn’t really say why, but we were descending towards the airport and then all of a sudden shot back up into the air and took some hard turns. I felt too many G forces and was pretty scared. I know planes are incredibly safe, but I just wanted to be on the ground. G forces are fun on rollercoasters, but not on planes.

We landed the second time around, but then I only had 15 minutes to grab food and get to my next plane before we boarded. The last plane was pretty small and was only half full, so I got a row to myself.

Now it’s the end of the first week of winter semester. We’re only taking 1 unit of Visceral Anatomy, so we’re learning about the abdominal and pelvic organs. We’ve had 4 lectures, 3 lab periods, 2 quizzes, and 1 review session.

It’s been hard to get focused again, but we have a lot of free time. We only have class twice next week, and then it’s basically the final.

I’m loving winter semester so far. It’s a nice transition into spring semester, and it’s giving me a good amount of free time to spend time with my classmates, get back into my exercise routine, and write all the blog posts that I’ve been meaning to write.

Does your PT school have a winter semester? What classes do you take? Share below!