My Typical Day of an Acute Care Clinical in PT School

This post contains some affiliate links, and I receive compensation if you make a purchase. This compensation helps with expenses to keep this blog up and running, at no additional cost to you. Read more

Wow, I haven’t posted in a while! I definitely needed some time off from my blog to focus on some other hobbies. Instead of writing, I started running more often and began playing tennis a few times a week with one of my classmates. I’m currently on a summer break from classes, so I have plenty of time to devote to writing!

I read through a similar post on Franish, who has blogged all throughout medical school. I know that copying ideas isn’t the most creative, but I enjoyed her posts so much that I wanted to create my own version for physical therapy school.

We had our first 6 week full-time affiliations during our winter semester, from January to mid-February. I was placed in an acute care setting, while others were in outpatient orthopedics or skilled nursing facilities. We were also in various locations, most of us spread throughout Maryland, but one classmate traveled as far as Virginia Beach.

Getting ready in the morning 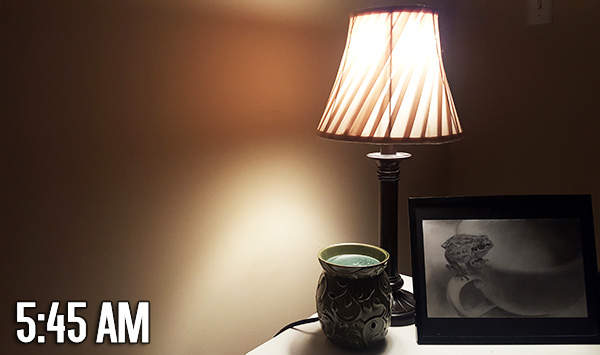 I had my alarm set for 5:45, which wasn’t easy because it was still dark outside. I usually turned on my lamp and then closed my eyes for another fifteen minutes (bad habit, I know!)

I got the scented wax warmer as a gift (I think from Kohl’s), and I drew that picture of the frog in high school. 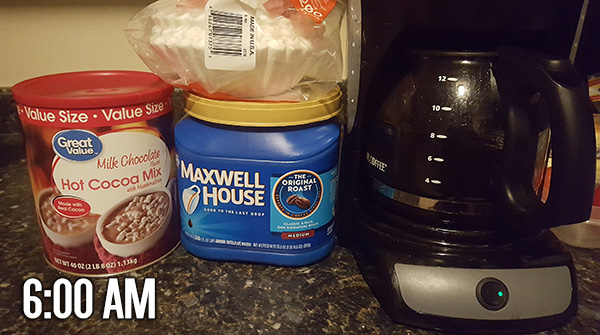 My second alarm went off at 6, and then I’d finally get out of bed to make some coffee. I’m still learning to enjoy the bitter taste, so I always add some hot cocoa mix and milk. It’s not the healthiest, but I tend to eat pretty healthy otherwise. The mini marshmallows always brighten up my morning, too! 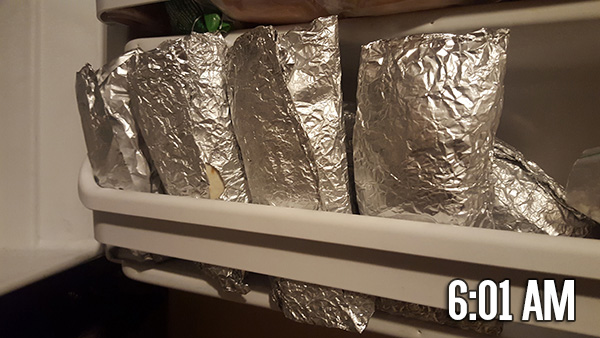 While the coffee is brewing, I grabbed one of my frozen burritos and heated it in the microwave. These were a lifesaver during my affiliation, so I didn’t have to worry about cooking and doing dishes every morning. I made enough burritos for two weeks. 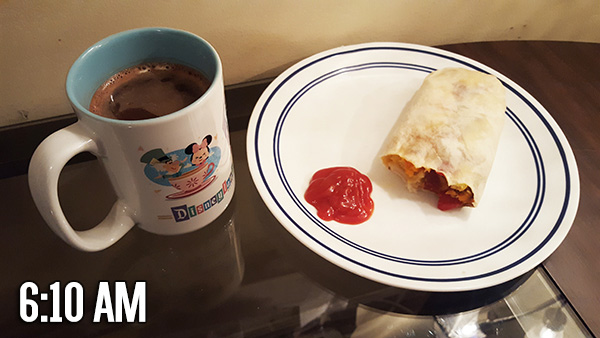 I eat breakfast in my room because my roommates were still sleeping, and usually watched part of a Netflix episode. I bought this Disneyland mug when I visited the park last December, so I drank out of it almost every day because it’s so adorable! 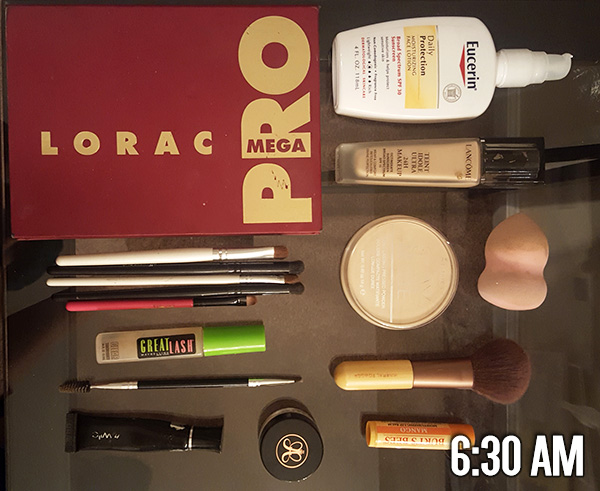 Makeup time! Here’s a list of what I normally wear, but sometimes I skipped mascara and eyeliner. A few of these aren’t included in the photo. 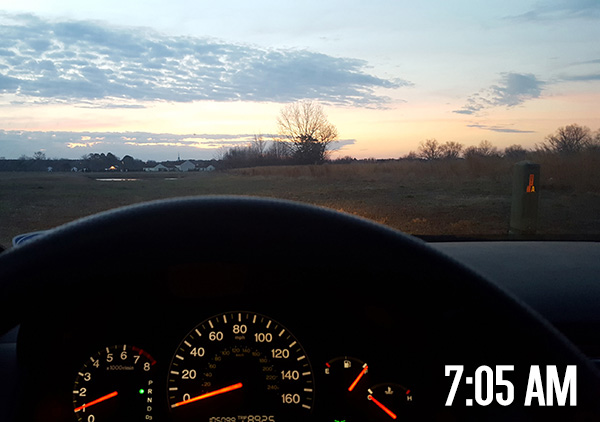 I usually began driving around sunrise, which was a nice start to my morning. Thankfully my commute wasn’t too long and rarely had traffic. 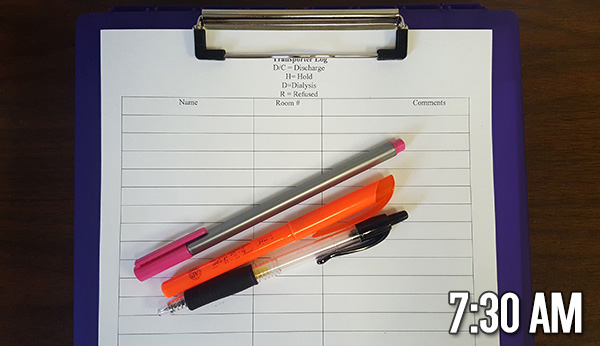 I began my chart reviews around 7:30am, and tried to finish before the morning meeting with all the PTs, OTs, and SLPs. On Monday morning I arrived before 7:30am because I had not seen most of these patients, and needed extra time to read through their entire chart.

This clipboard was such a lifesaver during my time in this affiliation! (I got this one from Amazon) I actually had the same clipboard as 2 other therapists, so I had to be extra careful to keep track of mine when they were around. Here’s what I usually kept in my clipboard: 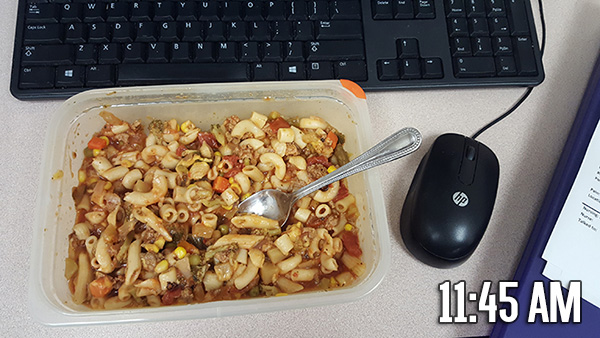 Lunch time! I was able to keep my food in the fridge near the nurse’s station, and microwaved my food in their break room. Then I carried my food to the PT office to finish completing my charts and reviewing the charts of any new patients to be seen in the afternoon.

Lunch was usually between 11:30am – 1pm, depending on what patients needed to be seen and when we could see them. 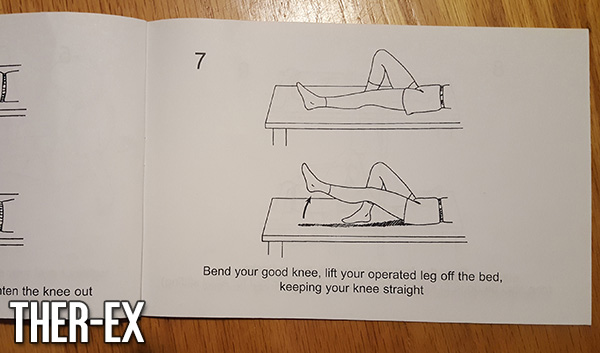 I was in the orthopedics wing a lot of the time. This is an example of the ther-ex book that are given to patients who are recovering from their knee arthroplasty surgery.

Finished for the day 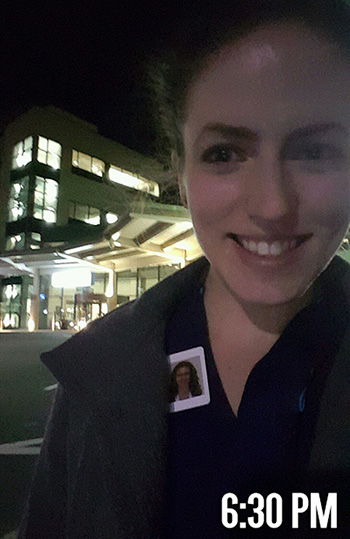 My day usually ended between 6-7pm (but sometimes I would get out early or stay later than that).

I usually drove straight to the gym after working because it was only a few minutes away! I’d be there for about an hour, and would lift weights or just run on the treadmill while watching a Netflix show.

7:45  – 10 pm I spent the rest of the night doing the usual things – chatting with my roommates, eating dinner, showering, typing up any notes that I took for the day and researching anything that I didn’t ask my CI about, wash my scrubs, watching Netflix, etc. 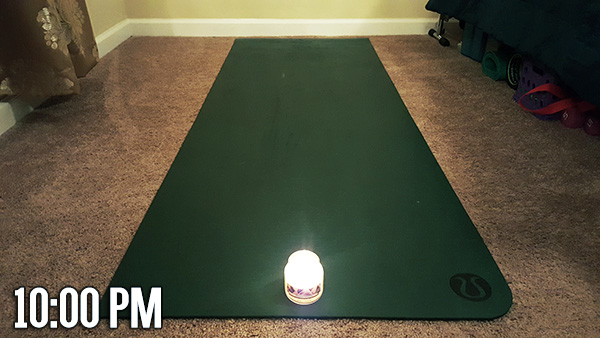 I tried to unwind every night by doing some light stretches and yoga poses. The candle always helps with relaxation (don’t worry, It’s not on the mat when I actually do yoga!) 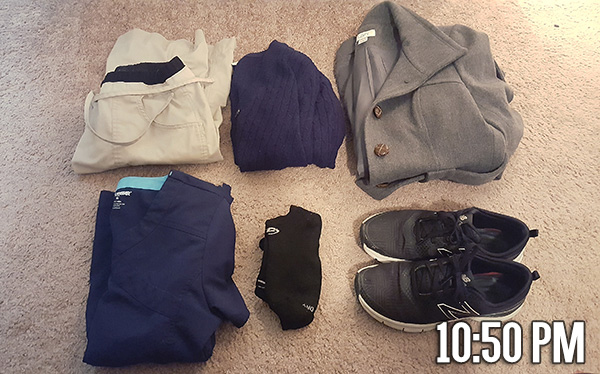 Getting ready for the next day! I wake up pretty early, and also wear the same thing every day, so I usually got my clothes ready the night before. They’re normally thrown in a pile on top of each other instead of neatly laid out like in this photo, but that wouldn’t make for a good photo! My uniform included the khaki scrub bottoms (from Amazon) and navy scrub top (from Walmart). 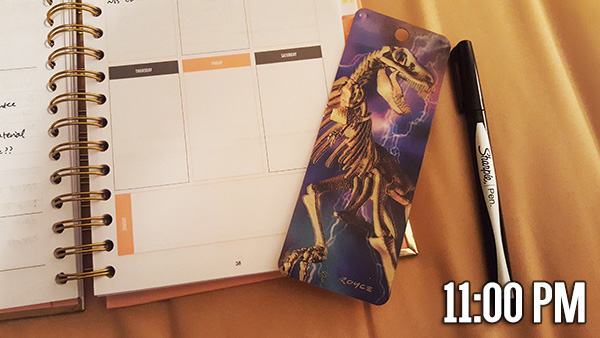 I also tried to write in my Happiness Planner every night. My goal was to write one good thing that happened every day so that I went to sleep with positive thoughts.