About half of the class met up the day before orientation, so I was really glad that I recognized many faces before orientation began. I also live in the neighborhood with a handful of first and second year students, so I was able to hang out with them a lot, and we were able to carpool to school every day.

This was the most grueling day by far. It was definitely exciting and pretty nerve-wracking because we spent all day in a lecture room. Most of our classes are in that room, so it was nice to get a feel for what classes will feel like. The chairs are also a lot more comfortable in PT school!

We had a lot of speakers planned for the day, and learned about financial aid, school policies, advisors, and lots of other stuff. The speakers went by pretty quickly, so we had an extra hour long break to do whatever we needed to do on campus. A group of us went to take our photos for our student ID’s. Then we had more speakers for the rest of the day.

One of the last things we did was break off into groups of 4 and we did an ice breaker. The professor handed out 6 personality adjective cards to each person, and we were told to order them by which ones were most similar to our own personality. Then we were able to switch with the others in our group, and then she told us to remove one card. And then another card. This was frustrating, because a lot of the cards described you. Nobody wanted to put “Friendly” or “Logical” at the bottom, even if the top cards were a better fit for them haha It made them sound like they’re not friendly or illogical, just because of how the cards were laid out.

The professor then came around and left a giant pile of cards in the middle of the table and had us pick any 4 cards that we liked the most, and ordered them. We discussed our order with our group and explained why we thought our cards fit our personality. Mine were “Friendly”, “Creative”, “Adventurous”, and “Curious”. 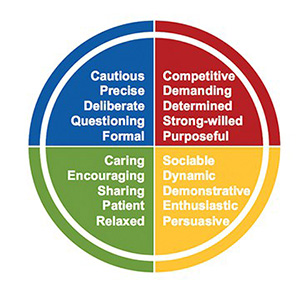 Each card was either red, yellow, green, or blue. The professor described each personality color and asked the class if they were accurate, and that was pretty entertaining. I had three yellows and one red, which I think fits me pretty well. I think a green would have been more balanced for my personality, but oh well.

My group had nobody with a “blue” card, and the professor came over to make sure we were okay with that lol

You can take the color personality quiz if you’re curious! It might not be too accurate, but I got yellow when I took the quiz.

What Color is Your TRUE Personality?

This day was much more relaxing. We had a few speakers in the morning, including someone who spoke about clinical education. Then we had a 3 hour break to do whatever we needed to do on campus. A group of us went to pick up our student ID’s, which we waited over an hour for because they still weren’t printed, and then waited another hour to get a parking pass. The waiting was frustrating, but there was a lot of classmates to talk to, so it wasn’t too bad.

We looked around the bookstore and I looked through the various anatomy atlases that were recommended to see which ones I liked the most. We were required to get one textbook and two atlases. I chose Netter’s atlas because the pictures are beautiful and I want to look at them. My roommate also has Rohen’s atlas that has actual dissection photos, so I can always borrow that book if I feel like I want to use it.

We returned to the physical therapy building for our anatomy orientation. The professor gave us a pre-test with clicker remotes, just to see where everyone was on the basic material. There were 10 questions and they tested mostly body planes/axes and if you knew certain terminology, like the difference between lateral/medial and what “vagus” means in latin.

We then had a mini lecture, and the professor explained the syllabus and went over some intro anatomy stuff. I love the way she teaches, as she explains things by using her body and other props, and has us move ourselves and stand up to learn better. That’s exactly how I learn well, and I’m really excited for class to begin!

At one point she threw a lemon to somebody and asked what they would make with it, which they responded “lemonade”, and then she made a metaphor about pt school. The student got to keep the lemon. Two of the second year anatomy TA’s stopped by class to say hello. They introduced themselves and gave a few words of advice, and one TA joked “I heard that alcohol helps” as his piece of advice. Everybody busted up laughing and the professor jokingly told him to leave lol

We retook the pre-test and everybody improved their scores, and I felt a lot better about my score the second time around. I remembered a bit from anatomy when I took it 2 years ago, and it definitely made me excited to start learning.

Then we changed into our scrubs and walked into the anatomy room to meet our cadavers. Our group of 4 from the color personality game was actually our anatomy group. Each group had one or two students that attended the anatomy class that was held for a month over summer, so that way we have an experienced classmate to help the rest of us.

Some people were nervous, others excited. We checked for any visible scars or markings and turned the bodies over, because we are going to start learning from the posterior side first. Everyone was curious about each person and we were given the age and cause of death. It’s crazy to think that each person had an entire life that we won’t know very much about, and we’re all incredibly grateful and fortunate that we are able to learn from each donor.

We also won’t begin dissecting for a few weeks, as we’re having lecture instead of lab until we get caught up on enough anatomy material to make sure we’re prepared for lab.

We woke up pretty early and drove to a river to go kayaking! Our guides handed out a deck of playing cards, and we split into 4 groups depending on the suit of our card. I was in the heart group, and we named ourselves the PDA’s. We actually meant Personal Display of Affection, but our professor came over and told us it also stands for Posterior Descending Artery, so we became the really nerdy group instead. There were also the Deviants and the Walker Texas Rangers.

We split into single and double kayaks, and all got into the middle of the river. The river wasn’t moving quickly, so it felt more like a lake. The guides threw a bunch of tennis balls into the water, and we had to navigate towards each ball and throw it into someone else’s canoe. The group with the highest number of balls in their kayaks lost the game. I accidentally threw a ball into my teammates because I knew I could make it stay in the kayak, but I got too excited and didn’t realize the kayak was actually on my team.

My team lost the first game,and then won the second. We almost tipped someone’s kayak over because we were more focused on grabbing a ball than where the boat was going. I also happened to block a ball with my oar, which then bounced back and landed in the thrower’s kayak. I felt pretty cool haha. Lots of people almost got hit with people swinging their oars, but nobody was hurt, as far as I know.

We then did a relay race. The double kayaks started on once side, then passed a rubber duckie to a single kayak, and everyone went back and forth until each kayak had gone across the lake. My team lost again, but we tried. My partner and I were chanting “left, right, left, right” to stay in sync, but that didn’t help us make up any time.

We then kayaked down the river and saw a bald eagle’s nest. It was so huge, and looked like a person could fit inside it. No bald eagles in sight, but the nest was really interesting to look at. We kayaked back up the river, and then hung out for a half hour. Some people were playing corn hole and frisbee, and a big group were doing tricks with a soccer ball in a circle, and a group of us sat under a tree and watched everyone. I was pretty sure I was sunburned and didn’t want to get any more red!

Then we drove back and I watched a TV show while eating lunch, and then we drove to the school to meet our academic advisors. The advisor asked about our undergrad school and where we’re living, because some people commute from further away and others live right on campus. He then talked about our independent study credits, clinicals, and gave advice for the program, and then we were done!

Everyone is pretty excited for school. I’ll finally be learning about things that are applicable to my future career, and I don’t have to worry about taking unnecessary classes or dealing with waitlists or figuring out what classes I need to take for each semester. It’s gonna be a lot of work, but I’m looking forward to it. Taking a year and 3 months off of school really makes you miss learning and being in a classroom, although I’m pretty sure I will miss all the free time I used to have.