The first final was physiology, and that was the same length as all of the previous exams, so most people finished in under 45 minutes. There were a couple questions that nobody had ever heard about, but somehow I managed to guess correctly on them.

The second final was in health/patient care (I still don’t know what to call that class…), and I was most worried about that one. It was a cumulative final, but we had so much information to relearn and we weren’t sure how difficult the test would be. The professor asked similar questions and skipped over most of a lecture that everyone was worried about.

Anatomy lab was really fun to take. I love lab practicals. They’re stressful because you only have a few minutes, but the final was easier than the exams have been, possibly because it was focused on the heart and lung information that we just learned and there weren’t very many new muscles that we had to identify. I was able to answer questions pretty quickly, so I had lots of time to think about how much work we did, and really take in the whole environment because we won’t be spending much more time in that room.

Normally we have anatomy lecture exams in the morning, and then practicals later in the afternoon. However, lecture and lab were on two separate days for finals. This was nice in a sense, but nobody wanted to study after the lab practical because we’re so used to taking the night off to relax. A group of us got dinner and then watched Trainwreck. We kept trying to study and I made it 30 minutes before giving up.

Anatomy lecture also went well. Normally those exams take 2.5-3 hours, but I was finished in 1.5 hours. It was also entertaining because while we were waiting to take our lab practical the day before, we colored on the whiteboard and drew the powerpuff girls, a dinosaur, students wearing scrubs, and a weiner dog. Those drawings were still up when we took our lecture exam the following day, so I glanced up every now and then to look at them.

I planned on taking a nap right after my finals were over, but I was full of so much energy! Whether it was the coffee I drank that morning or excitement from finishing the semester, I’ll never know. I went straight to the store and made about 100 cookies. We then had a party with the first and second year students that were not leaving town that night. It was nice to finally talk to everyone about something other than school.

Around midnight, we started playing 90’s songs and everyone shouted the lyrics to “I Want It That Way” by Nsync and that was easily one of my favorite parts of the semester. I love my classmates, and it was a perfect way to begin winter break. 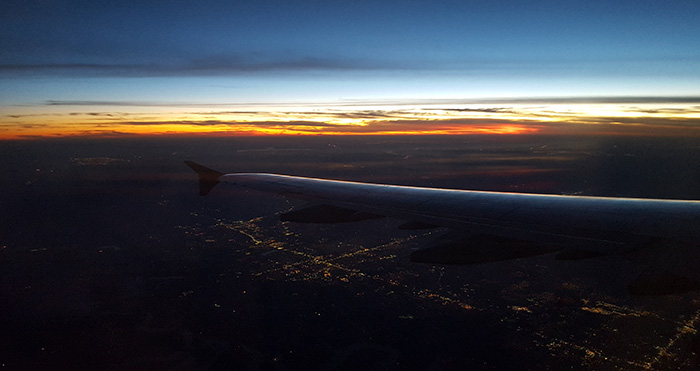 It took me an entire day to fly back home, but it’s nice to be back. It does seem a little boring because I don’t have any classes to study for, but I have plenty of other things to keep me busy! I have the next few days to do all the Christmas shopping that I’ve put off, I finally have plans for new years, and I’ve been working on my blog a lot. I miss my classmates a ton already, but it’s nice to finally see my friends and family that I haven’t seen in 6 months.

The nighttime is of my hometown (or a town nearby).

How was your first finals week of PT school? Share your experience below!