Spring semester was off to a fast start!

We missed the first two days of classes, so the first week was pretty short. We made up one lecture on Friday afternoon and had an extra Kinesiology lecture instead of palpation lab.

Neuro and research are only Monday and Tuesday so we started those on the 2nd week of classes. Neuro started pretty quickly, and we had skulls at our tables to look at while the professor gave the lecture. We also reviewed some stuff that we learned last semester and then learned the anterior triangle of the neck. That was rough because we had lecture in the morning and then dissected later that afternoon, so it was frustrating to not know anything about what you were trying to dissect.

Our first exam was in exercise physiology and that was rough. I think everyone spent the first two weeks studying only ex phys because we had no idea how tough the exam would be. We had this professor for only a couple weeks last semester, so this was our first full class that they taught. The entire class met up in the hallway to discuss several questions, and we were pretty much torn in half on maybe 6/36 questions. A lot of people were frustrated because questions were worded a bit weird, so some people knew the material really well but had read the question slightly differently.

I walked into the exam knowing enough material to get 100% or close to that, and I left not knowing if I got an A or a C, so that was a terrible feeling. I went home and ate brownies and tried to find answers in the Powerpoint slides, and then did yoga for an hour with a friend.

Palpation lab is really fun! Half the class is a patient and the other is a therapist, and we rotated around the room to palpate multiple patients. On the first day we just found the fibular head, ulnar head, ulnar nerve, biceps tendon, and a few other structures. We learned about the importance of palpation lab, how to feel structures by using various parts of your hand, and how sometimes it can be helpful to palpate with your eyes closed.

The second day of palpation lab was the hip/pelvis. We palpated the iliac crest, ASIS, PSIS, sacral hiatus, and ischial tuberosities. After learning how to palpate everything, we did a “speed round” where we found ischial tuberosities quickly and then moved onto the next patient as fast as possible. A couple guys seemed a little weird about palpating the girls so that was entertaining. Everyone learned really quickly and our skills improved immediately, especially because there are differences between classmates and everyone was able to help each other. 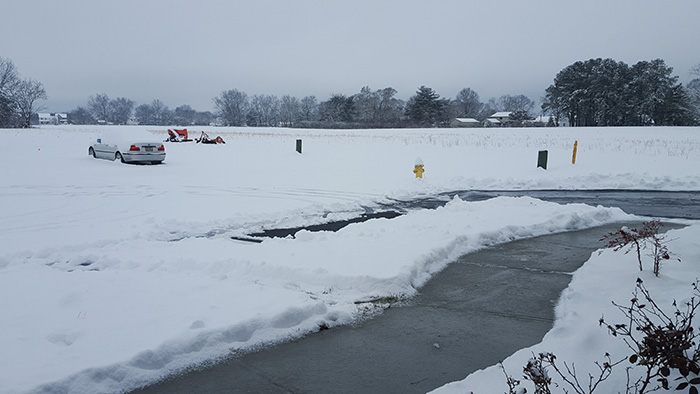 This week we had another snow day on Monday! I woke up to go to the gym and saw that class was cancelled and I was so confused. I had no idea that it was supposed to snow overnight.

We’re even more behind in our neuro class, and that exam got pushed back another week (so now we’re 2 weeks behind). This was nice in a sense, but now we have 3 exams all in the same week. We also have to make up our exercise physiology lecture later this week.

The first pathophysiology exam is in 2 days, and I have 30 pages of notes to learn! I read through 1/3 of my notes this morning while at the gym, so hopefully all of that information was able to stick.

This semester is picking up really quickly. I’m definitely still on top of the material which is good, because last semester I tended to ignore the classes that didn’t have an upcoming exam. I’m drinking more coffee and still exercising every day before class. PT school is finally feeling a lot more manageable. We’ll see if I can keep it up. I also felt great at the beginning of last semester, right before all the exams started.

How do you manage studying when you have seemingly endless notes to learn? Share your tips below!