The Most Stressed Out I’ve Ever Been

Several times throughout the past couple of weeks I’ve said to myself, “This is the most stressed out I’ve been in PT school”, and then I would say the same thing the next week. A lot has happened in the past month, including 8 exams (yes, you read that correctly. 8 exams in 1 month), a messed up sleep and exercise schedule, a new baby niece, and a recent bug infestation. It’s been hectic, but I finally have the chance to take a breath and get back to normal.

I haven’t written since the beginning of spring break! I definitely missed writing. I’ll try to remember what important things happened, but it’s been such a blur that I’ll probably leave a lot out.

Spring break was fun! I didn’t do any work for the first 3 days, so I watched TV, worked out, volunteered at the animal shelter, and spent time with friends that were still in town. I started going over notes with my boyfriend during the week, because that professor talks so quickly that you often miss a ton of important points during lecture. I spent one day shopping at the mall for new workout clothes and a new yoga mat. I was thrilled about the yoga mat because it’s a beautiful color and I don’t slip anymore when my hands get sweaty. I also went rock climbing that day because I haven’t been climbing in 6 months and missed it a ton. It sucked to see how much forearm strength and technique I lost, but it was still really nice to be climbing again.

The last weekend of spring break was spent studying my brains out! We had an exam on that Monday for our Research Methods class, which basically just meant that we had to memorize some powerpoint slides. Then on Tuesday, we had our first Neuro practical. Nobody knew how that was going to go, because our professor tends to ask detailed questions from the powerpoint slides on the multiple-choice exams. Most people ended up over-studying and it went better than expected. Then on that Thursday, we had our second Pathophysiology exam. However, on Wednesday, we learned 6 new pages of material that were going to be tested on Thursday’s exam….so now I had 50 pages of notes. I underestimated how much information was going to be on the test, and attempted to learn everything in 2 days. I still passed, but that’s been my lowest grade all semester. This was the class that I got a 103% on the first exam so my grade is still fine.

So that was really stressful. I didn’t exercise that week because I was studying non-stop for those 3 tests. We got our kinesiology test back that Friday, from the test we took the day before spring break. Most people did really well, especially because there were 5 points of extra credit that you could earn. Friday was a good day!

We had an Exercise Physiology exam the next Wednesday. However, these exams are pretty difficult. The material itself is not that complicated, and we have a bunch of powerpoint slides and a textbook to reference if needed. The exams for that class are incredibly stressful though because it’s difficult to do well on them.

We had our first Kinesiology lab practical the following day, which was basically just on our hip, knee, and ankle dissections. We had a lot of identification questions, but there were some more challenging questions. I did a lot better than expected, considering how difficult the test was.

That weekend was pretty nice. I studied for neuro that Saturday, because we just started learning about ascending and descending tracts. They took hours to learn, so I’m glad I started studying that early.

On Sunday, my boyfriend raced a duathalon. We woke up at 3:15am and started driving by 3:45am. I showered in the morning and we made coffee for the road, but I was actually pretty awake because I was excited to watch a race. We made it there by 7am, so we just killed time until the race began at 9am. It was freezing and I was not prepared. Thankfully his parents were also there, and they brought extra warm clothes so I was able to wear those for the day.

So a duathalon consists of a 5k run (3.1 miles), then a 22 mile bike ride, and then another 5k run. We watched the start and waited for him to come in from the first run because that only took 15 minutes or so. I took photos and also had a stopwatch so I could tell him how far he was behind those ahead of him. During the bike ride (which takes about 1 hour), I walked to a river with his parents. There were a lot of butterflies so his mom took a lot of photos. We walked back to watch the last 5k, and I took photos again. He ended up with the 3rd fastest time overall, so that was really exciting! However, one of the left turns was poorly marked and a lot of bikers ended up biking straight instead of turning left, so a lot of people got lost and ended up riding a lot longer than they should have.

The rest of the week was pretty boring. We had a math exam in exercise physiology and that went well I think. We’re still waiting on those scores.

We had a neuro exam this Monday. I have never studied so hard in my entire life. I began studying for this exam about 1.5 weeks before we took it, and I studied about 4-5 hours during the week and 8-12 hours on the weekends. I probably studied for 25 hours the weekend before the test. We had about 250 powerpoint slides to learn (the first test had about 400), but the material was pretty confusing. I spent a lot of time drawing and searching for explanations on Google.

I actually felt alright coming out of the test, which was surprising. This professor tends to ignore concepts and test you on very specific details on each slide, which is incredibly frustrating. The test is curved so it’s fairly graded. It’s just so frustrating to feel like you learned and understand a huge amount of information, but you’re only tested on such a small amount of that knowledge (and not really tested on the seemingly more important concepts).

It’s been a pretty stressful month. I haven’t had enough time to workout regularly because instead of exercising in the morning, I woke up to study before class.

I took a break to do yoga in my room, and noticed about 15 tiny bugs crawling on it. I was immediately grossed out and killed them all, but then I had to wash my mat because it was covered in dead bugs. I vacuumed my floor, and then noticed that there were a couple on my wall. I kept vaccuuming for a few days, but one day I found 2 on my bed sheets right before I was going to sleep. I threw all my sheets into the washer and slept on the couch for a couple days.

I tried to take some photos of the bugs to get them identified, but they’re so tiny that you can barely see them unless you’re close. I bought diatamaceous earth off Amazon and spread that all over my carpet, and left it there for a week. That powder got all over my room, and it covered my desk, books, shelves, and shoes with a light layer of white dust. It’s supposed to kill anything with an exoskeleton, so I crossed my fingers that it would work for whatever these little bugs were. I vaccuumed it up the following Friday, and left my room untouched for the weekend.

This monday I noticed 6 bugs on my wall, and 1 of them looked like an adult. That freaked me out because I thought they had started to go away. I’ve had my bed away from the walls for 2 weeks now, and check my bed every night to make sure the bugs haven’t gotten on them. I haven’t been able to do yoga in my room because I don’t know how many bugs are on the carpet. I’ve been on the edge of tears several times, and ended up crying that day. My landlord gave me the number of the pest control company that they use, so I’m waiting to hear back.

I was able to take a photo of the larger bug, and someone might have identified the correct species. The diatamaceous earth won’t work on them, so I’ve resorted to vaccuuming my room 2-3 times a day. That seems to have helped a lot, but I don’t know where they are coming from, so I’m not sure if they will ever go away.

This week has been rough. I’m not paying attention in class as much, and I just feel generally awful. I didn’t study on Monday or today, because I feel like I’m about to mentally explode. I did go running after class yesterday and today, and that’s the only thing that’s been cheering me up. I’ve also been eating ice cream a lot more.

I feel burned out, and it’s probably from a combiation of not exercising, studying too much, and not having my bedroom and yoga mat to relax. I’m hoping that running and taking a break from studying will help. I already feel a lot better because I ran today and didn’t worry about studying tonight.

Now I can end on a positive note. I’ve also had a lot of good memories this past month. I went to my first hot yoga class with 3 other classmates. I’ve never sweat so much in my entire life. My friend said “I think I just lost 1/3 of my blood plasma”, and we thought it was the funniest thing because we’re nerds. I felt great after I was done, but I’m not sure if I’ll go again anytime soon.

We woke up for class one morning and it had snowed. It was warm and sunny the day before. I didn’t even wear a jacket to class. Nobody knew that it was going to snow. I was pretty excited because I love the snow! 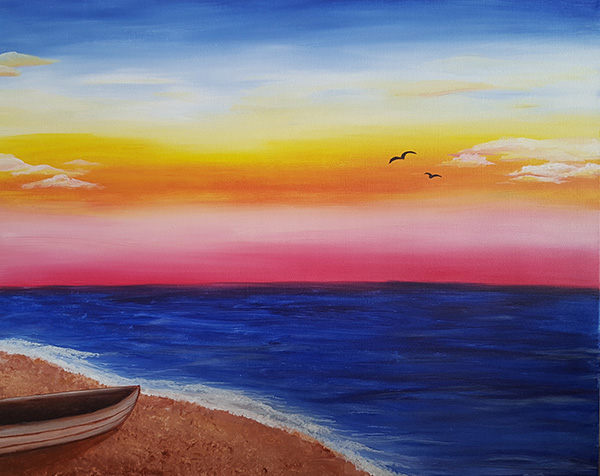 We also went to Paint Nite last week! About 12 of my classmates went and it was so much fun. When we were painting the boat, a woman from the other side of the room said “This boat was definitely handmade” and everyone exploded in laughter. I love painting and have painted a lot before, so I had to try to keep up and stop being such a perfectionist. I also painted the sand by blotting with a paper towel. I shared bacon cheese waffle fries with my friend across the table from me, and ended up getting bacon in my paint.

We decided that we all want to do Paint Nite again, but we might just have it at somebody’s house and have me and another classmate teach the painting. That way we can drink all the wine that we want without having to buy expensive drinks at the bar.

How do you manage your stress? Share some tips below to help out others!